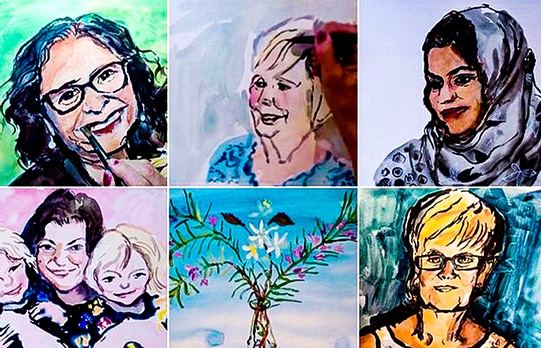 An artist has done a series of portraits to “honor” 118 women killed by men.

She claims she wants people to remember that the victims “aren’t just names”. Artist and illustrator Henny Beaumont is working with the Centre for Women’s Justice and the Femicide Census (uh, what?!) to memorialize women who were killed by men (only men) between March 2020 and March 2021.

Let’s get something very clear first:

Victims should be memorialized, and painting is a beautiful way of doing that. It is also a wonderful thing to do for grieving families. All those women painted deserve to be remembered and celebrated and deserve their memories to be treated with the utmost respect; the men who killed them deserve to be severely punished.

So, what’s my problem?

Using these women’s deaths as a political weapon to promote left-wing ideologies is abhorrent. Even if you choose to only honor women and not all victims of murder, that’s okay (I suppose), but why only honor women who have been killed by men? Why such a specific group of people based on gender?

This is what the left love to do though, gender is a social construct and does not matter unless you are a man of course! This artist is specifically targeting all men as a group and painting them (excuse the pun) as violent rapists and murderers. It’s like this artist believes only men kill women and no woman in the history of the planet has been killed by another woman!

But here’s the biggest kicker that will blow your mind:

Men have been killed by women!

Furthermore, men have committed suicide thanks to women who have falsely accused them of sexual assault. Millions of men have lost their children in the Family Court because manipulative women have lied. Where is their justice?

It is not a relationship issue either, lesbian and transgender relationships are commonplace now but domestic abuse still occurs.

Imagine if an artist painted pictures of all the white people who have been killed by black people, can you imagine the outrage? This is no different. This is targeting men as a group and saying that all men are violent monsters.

Violence on women is not a man problem, it is an individual problem, some people kill other people. Individuals commit heinous crimes, the likelihood of them committing those crimes is not higher just because they are a man, black, Asian, transgender, gay, or white.

This is almost as bad as when Green Party peer Jenny Jones said to put all men on a 6 pm curfew to keep women safe on the streets!

Instilling discriminatory ideas about a group of people as a whole is exactly what the left claim to hate (they love it really) and it’s a sure-fire way to an unproductive, miserable and dangerous society.