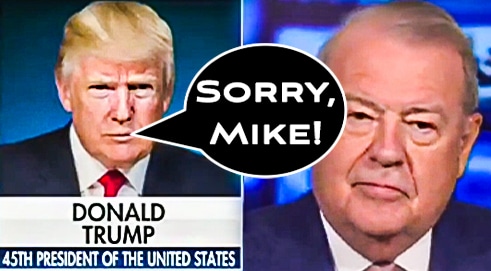 It shocked viewers as some expected Trump to simply pick his previous vice president, Mike Pence.

Think about it though:

This comes after Mike Pence’s recent speech where he said he had spoken to President Trump several times since but that they will most likely never see eye to eye about what happened on the January 6th Capitol riots.

The fact that they don’t see eye to eye on that important day is reason enough for Trump to consider a running mate that is on the same page. That day was critical for Trump, the American people and the history books. For Trump’s vice president not to unequivocally support him on that day is certainly not ideal.

Ron DeSantis is the governor of Florida, the state where Trump currently resides. DeSantis is a strong Republican who has recently annihilated the left-wing ‘woke’ agenda.

To make a point:

Hordes of people have flocked to Florida recently to try and get back the freedom they have lost in other states thanks to the pandemic. Governor Ron DeSantis signed an executive order that immediately suspended all remaining covid restrictions in the state, including mask-wearing and social distancing. He sensibly said that asking vaccinated people to wear masks would undermine confidence in the vaccines, something the Democrats have never acknowledged.

And if that’s not enough:

DeSantis has also been praised by the public for signing the Fairness in Women’s Sports Act which prevents biological males (who now identify as female) from competing in women’s sports. He said that the bill preserves fair opportunities for female athletes to demonstrate their strength and skills in athletic competition. Bravo!

The popularity of DeSantis is skyrocketing among conservatives which makes him one of the most popular choices for Trump as a running mate. Mike Pence has been mostly out of the public eye recently and seems to already be largely forgotten.

To be brutally honest:

No one voted for Trump/Pence because of Pence, they voted for Trump! Although Pence brought a small base of Christian supporters and donors, he was always in the shadow of Trump and paled in comparison to Trump’s personality.

For Trump to get the presidency in 2024 he’s got to pull out all the stops and one way to do that is to pick a vice president who has a large following and that public love.

For Trump to get the presidency in 2024 he’s got to pull out all the stops and one way to do that is to pick a vice president who has a large following and that public love.

Ron DeSantis is an impressive candidate.

2) What you need to know now about COVID-19 in Florida: https://floridahealthcovid19.gov/

3) Vaccine Mandates ARE COMING But They’re a Crime Against Humanity: https://lifeline.news/opinion/f/vaccine-mandates-are-coming-but-they%E2%80%99re-a-crime-against-humanity

[…] for the 2024 presidency, he has hinted at possible running mates. Speaking live on Fox News, Trump snubbed Pence as a potential running mate and spoke fondly of Florida Governor Ron […]

Why Andrew Cuomo Has CRIPPLED the Democratic Party Beyond Repair

[…] This presents an unprecedented opportunity for Republicans to cripple the Democratic party and its chances in the 2024 election.  […]

This website uses cookies to improve your experience while you navigate through the website. Out of these, the cookies that are categorized as necessary are stored on your browser as they are essential for the working of basic functionalities of the website. We also use third-party cookies that help us analyze and understand how you use this website. These cookies will be stored in your browser only with your consent. You also have the option to opt-out of these cookies. But opting out of some of these cookies may affect your browsing experience.
Necessary Always Enabled
Necessary cookies are absolutely essential for the website to function properly. These cookies ensure basic functionalities and security features of the website, anonymously.
Functional
Functional cookies help to perform certain functionalities like sharing the content of the website on social media platforms, collect feedbacks, and other third-party features.
Performance
Performance cookies are used to understand and analyze the key performance indexes of the website which helps in delivering a better user experience for the visitors.
Analytics
Analytical cookies are used to understand how visitors interact with the website. These cookies help provide information on metrics the number of visitors, bounce rate, traffic source, etc.
Advertisement
Advertisement cookies are used to provide visitors with relevant ads and marketing campaigns. These cookies track visitors across websites and collect information to provide customized ads.
Others
Other uncategorized cookies are those that are being analyzed and have not been classified into a category as yet.
SAVE & ACCEPT
wpDiscuz