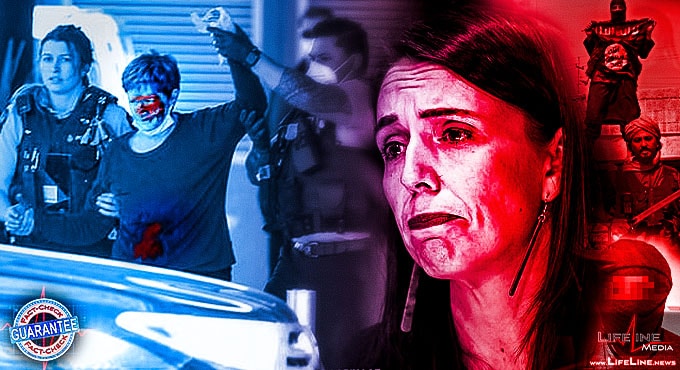 Screaming “Allahu akbar!”, the man who was a known ISIS supporter, stormed through a New Zealand supermarket stabbing victim after victim.

Six people were injured, three critically before the police came in and shot the suspect dead at a supermarket in Auckland, New Zealand.

Ahamed Samsudeen, 32, originally from Sri Lanka was a known Islamic State supporter who was sentenced to one year of supervision for possessing IS propaganda.

The man was a known terror suspect and was under 24/7 surveillance; authorities thought he was simply getting groceries and wasn’t planning a terror attack. When he pulled out a large knife and started indiscriminately stabbing people, police arrived in 60 seconds but not fast enough to prevent serious injuries.

A shopper described the man as “running around like a lunatic” while stabbing anyone in sight. People were hysterically screaming and running out of the store when the undercover policeman who was surveilling the attacker went in to check out the commotion.

Upon seeing the suspect with a knife, he told shoppers to stand back as he proceeded to shoot the terrorist five times, as heard on mobile phone footage.

During a previous trial for plotting a terror attack using knives, the judge ruled that under current laws in New Zealand, planning a terror attack is not in itself an offense! He was instead simply given a one-year supervision sentence.

The man had been known by authorities since 2016, but courts couldn’t jail him under New Zealand’s liberal laws; despite police describing him as “extremely dangerous” and “very likely to carry out an attack”.

New Zealand prime minister, Jacinda Ardern, condemned the attack as an act of terrorism but went on to emphasize that “It was carried out by an individual, not a faith.”

The Prime Minister and the government have been criticized for not doing more to prevent the attack. Indeed, the PM acknowledged that she had been personally briefed about the individual but that the government had exhausted all legal avenues for incarceration.

FEATURED ARTICLE:  Veterans in Need: LIFTING the Veil on the US Veteran CRISIS

First, the New Zealand left-wing government has let down the people of New Zealand with their liberal terror laws that do not protect citizens. For a terrorist that was known by the authorities for five years, acknowledged as being extremely dangerous, known to the Prime Minister as a threat, to get the opportunity to stab six people in a supermarket is utterly shameful.

Whether the blame is put on parliament who made the laws or the courts who enforce them, either way, it is gross incompetence by the authorities.

This is a direct consequence of what’s happened in Afghanistan and should serve as a warning to us all.

Under Joe Biden, the US has been thoroughly embarrassed by the Taliban. The Taliban have claimed victory over the US and mocked them in the process, which will be a great inspiration for all extremists around the world.

Extremists like ISIS and Al Qaeda will see the situation in Afghanistan as a huge victory, proof that the West can be beaten and will give them a renewed sense of motivation and confidence.

It’s already started and this is the price we all pay for Biden’s mistake.

RELATED ARTICLE: The PHOTO That Should END Biden’s Presidency

[…] a significant decline of sperm counts in men from North America, Europe, Australia, and New Zealand between 1973 and […]

This website uses cookies to improve your experience while you navigate through the website. Out of these, the cookies that are categorized as necessary are stored on your browser as they are essential for the working of basic functionalities of the website. We also use third-party cookies that help us analyze and understand how you use this website. These cookies will be stored in your browser only with your consent. You also have the option to opt-out of these cookies. But opting out of some of these cookies may affect your browsing experience.
Necessary Always Enabled
Necessary cookies are absolutely essential for the website to function properly. These cookies ensure basic functionalities and security features of the website, anonymously.
Functional
Functional cookies help to perform certain functionalities like sharing the content of the website on social media platforms, collect feedbacks, and other third-party features.
Performance
Performance cookies are used to understand and analyze the key performance indexes of the website which helps in delivering a better user experience for the visitors.
Analytics
Analytical cookies are used to understand how visitors interact with the website. These cookies help provide information on metrics the number of visitors, bounce rate, traffic source, etc.
Advertisement
Advertisement cookies are used to provide visitors with relevant ads and marketing campaigns. These cookies track visitors across websites and collect information to provide customized ads.
Others
Other uncategorized cookies are those that are being analyzed and have not been classified into a category as yet.
SAVE & ACCEPT
wpDiscuz