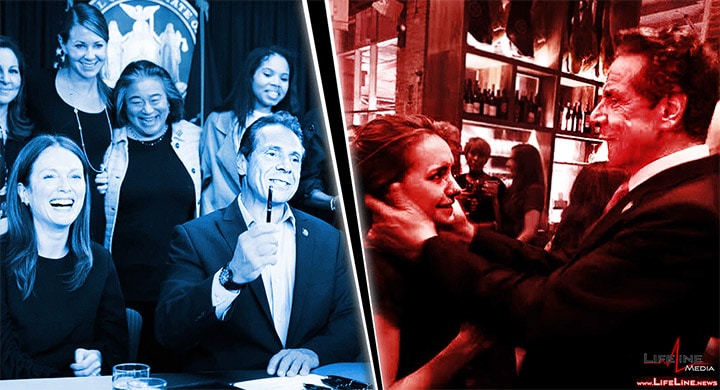 Governor Andrew Cuomo is the poster child for ‘rules for thee, but not for me’, which highlights the hypocrisy of Democrats and the left.

President Biden was quick to call for the governor’s resignation as was Speaker Nancy Pelosi saying, “I commend the women who came forward.”

Governor Cuomo adamantly denied the allegations, releasing a video saying they were false and showing a bizarre montage of him kissing everyone.

However, earlier today, while still denying the allegations, he finally resigned as governor.

His career is finished…

This presents an unprecedented opportunity for Republicans to cripple the Democratic party and its chances in the 2024 election.

Considering his age, Biden is unlikely to run for re-election, not to mention that he is already showing possible signs of dementia. This presents a huge question mark over who the Democrats will pick as a presidential candidate.

Unfortunately (for the left), Andrew Cuomo was the golden boy governor of the Democratic party and a strong candidate for a presidential run in 2024. He was well known and very popular with lefties and had the publicity advantage of his brother, Chris Cuomo, being on CNN.

The nature of the allegations is extremely embarrassing to the left. At the core of left-wing ideology is the MeToo movement, where the left preaches that all women should be believed and that we must never blame the victim.

To illustrate the point, just look at how the left treated Justice Brett Kavanaugh before he was confirmed to the supreme court. When he was accused of sexual assault, the Democrats showed him no mercy, despite the report finding that there was “no evidence to substantiate any of the claims”.

For a key figure in the Democratic party to be accused of sexual assault, by multiple women, and then deny the allegations by saying the women are liars, is a proverbial dagger to the heart for the left.

But that’s just part of the story…

RELATED ARTICLE: Biden Gaffes: Are These EVIDENCE of Dementia?

FEATURED ARTICLE: 10 UFO Sightings that are the Best EVIDENCE of Aliens!

The cherry on top is that the report found Cuomo cultivated a disgustingly toxic workplace environment that normalized sexual harassment and that he viciously retaliated against any women who spoke up. A former employee told investigators that Cuomo made women feel like ‘prey.’

The hypocrisy of it all from a far-left politician is truly stunning!

Cuomo’s political career is finished, the Democrats have already thrown him in the trash, but the reputational damage is done.

This presents a key opportunity for Republicans to twist that dagger into the Democrats. Not only have the left lost a top candidate for president, but the nature of the allegations can be used to prove the ‘rules for thee and not for me’ hypocrisy of the Democratic party.

Just as Democrats said no social gatherings and always wear a mask, videos are then seen of Obama’s huge birthday party with him and guests dancing in close proximity with no masks!

If there’s one thing that voters despise, it’s politicians saying one thing and doing the opposite.

Andrew Cuomo was a champion of the MeToo movement. When signing new legislation in 2019 to protect women from sexual harassment in the workplace, he said, “Let’s honor the women who have had the courage to come forward to tell their stories – and let’s actually change things.”

11 women have just had the courage to come forward and tell their stories but you’re saying they’re all liars?

Rules for thee, but not for me (the motto of the Democratic party)!

ARTICLE: Twitter Reacts To WHO Announcement With RAGE (Liberals LOSE It)

5) ‘No evidence to substantiate any of the claims’: Takeaways from report on Kavanaugh allegations: https://eu.usatoday.com/story/news/politics/2018/11/05/brett-kavanaugh-allegations-report/1889770002/